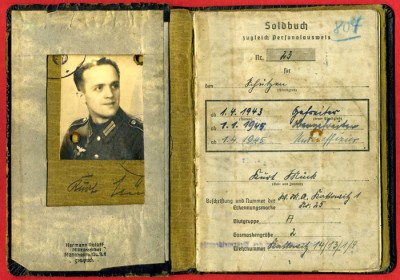 Some people have asked me about the gold foil embossed Soldbuch envelopes offered by a number of vendors. I believe this is a fantasy item that never existed during the war. A similar envelope was used in some cases with the Wehrpass- but unlike the Wehrpass, which would be kept on file by a soldier’s unit, the Soldbuch was carried daily as an identity document and an envelope of this sort seems rather impractical. There were of course a variety of protective covers for the Soldbuch, ranging from self-made covers of paper or fabric to private-purchase items like this one, of artificial leather, and maker marked by “Hermann Roloff Militärartikel” in Mannheim. The Soldbuch itself belonged to Unteroffizier Kurt Mück, who was considered not fit for field service and who worked in a Wehrmacht recruiting office in Kattowitz. The black protective cover shows wear from use but the national eagle and the word “Soldbuch” are still visible.