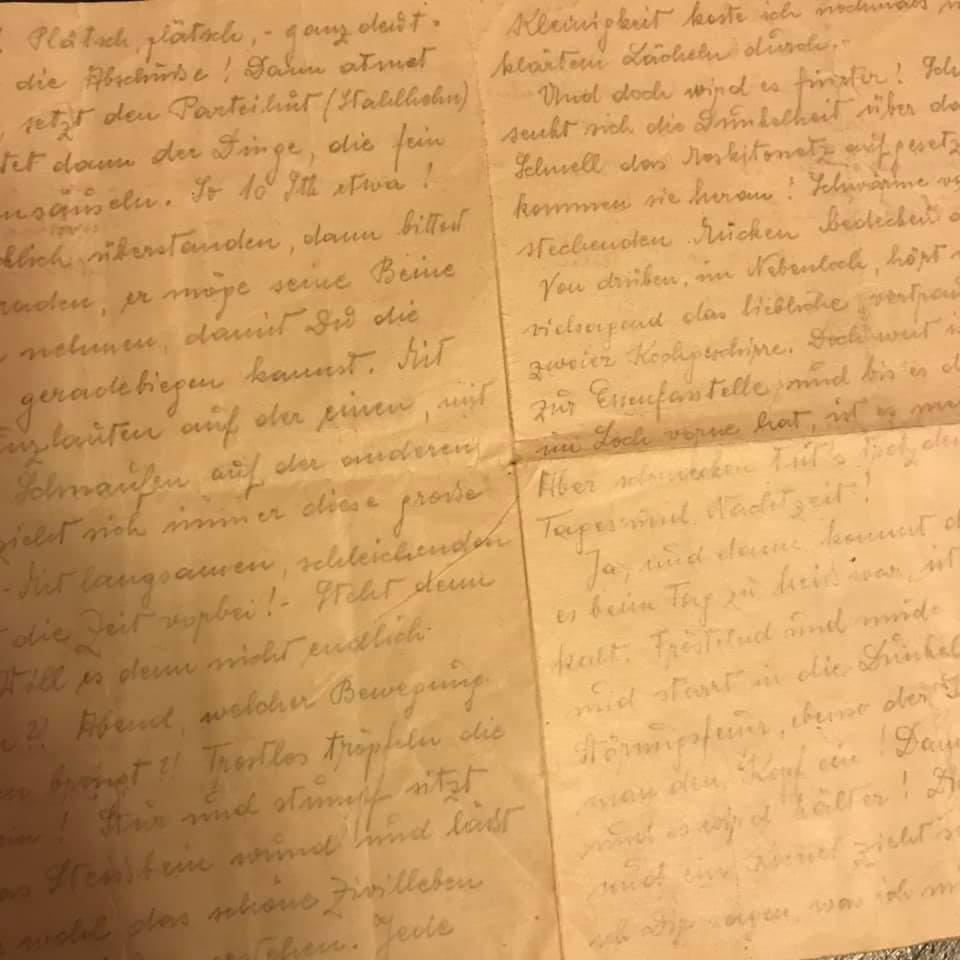 Heinz Zboril: A story of one young soldier, 1943

I have hundreds of letters written to and from German soldiers in the Second World War. I don’t know where most of them came from. Outside of a few, that are related to specific units, or are part of other groupings, they were just things I picked up at flea markets or bought because they were cheap, sometimes one at a time, sometimes in lots of dozens or hundreds of letters from one person. When I got them, there was no easy way for me to look up the coded Feldpost numbers to see what units each letter-writer was a part of. All of the Feldpost numbers are now online, and last night I was going through one of my binders of letters, labeling each letter in the binder with the unit associated with it. Usually these letters are super boring, not worth translating or even reading. Sometimes, reading them, I even feel a little embarrassed, reading private communication between two strangers. But very rarely, I will find a letter with such great content that reading it feels like I myself am getting a letter from World War II. Such a thing happened last night, as I looked for the first time inside an envelope sent in 1943 from a soldier in Panzergrenadier-Regiment 7. Originally intended to be sent from the front to home, this letter was kept over time by people who thought to save it and it has now made a longer journey, into the future, where it has been translated by me and is now being shared on the Internet.

For 8 days now I have been sitting in a hole with the second machine gunner (a guy from Vienna), moping. A couple of hundred meters away are the Russians, in a little patch of woods; we meanwhile lie in a completely open field.

You only need to lift the helmet in the air, and – Bang! – soon it has a hole! But what a hole it is! The exit hole is the size of a fist! The damned explosive bullets! I know of two, who got a little wound in the leg, that should have sent them home, who bled to death. Back and forth go the artillery shells (heavy boulders, 15 cm!), then all the crap goes up in the air, meaning sand and dust gently come down on you, so you spit fire. This happens every 15 minutes, and then Ivan’s famous mass-production – the mortar! – Splat! Splat! – you can hear the impacts very clearly. Then you quickly breathe in, put your party hat (helmet) on and then await the things, that delicately whisper as they come near. Such a thing about 16 times. If you are lucky enough to survive it, you ask your Kamerad in your hole if he could please move his legs toward himself a little, so you can straighten your own legs a little bit. With a sound of satisfaction on one side, and groans of displeasure on the other side, this great change is carried out.

With slow, creeping steps, the time passes! Is the sun still up? Doesn’t it finally want to be evening? Evening- which brings movement and lunch! The minutes drip by dismally.

Stubbornly and dully you sit there on your tailbone sore and for the 100th time allow the beautiful civilian life to stand in your mind’s eye.

I savor every detail with glorified smiles.

From over there, in the next hole, you can already hear the meaningful, sweet, familiar sound of two mess kits. It’s a long way from the food distribution point and when it finally gets to the Landser at the front, it’s usually ice cold. But it tastes good anyway, every day and night!

Yep! And then comes the cold! When it’s too hot in the day, it’s then too cold in the night. Frosty and tired you sit with the machine gun and stare into the darkness. Machine guns shoot harassing fire, those of Ivan do too. Often you have to duck your head down. Then the moon comes out and it gets even colder. The stars glimmer, a comet traces its path.

Do I need to tell you, what I wish was with me?

The night is without end! Doesn’t it finally want to be morning? Sun, where are you? Then comes the fog, and far in the east, dawn begins to break. It has become bitterly cold, we sit shivering at the machine gun. Come on, sun!

And then there it is! Burning hot, it stands in the sky and relentlessly sends its parching rays down on to us. Doesn’t it finally want to be evening?

Yes, Karl, and nevertheless I smile, because I am already looking forward to leave! I figure it will be in October or November! Three weeks!!! My God I can hardly imagine it!! Hopefully you will still be in Vienna!

I send you heartfelt greetings as always, and remain your old friend Heinz.P.S. Best greetings to your dear parents! Let them read this letter. I would have liked to have written to them but I only had one piece of letter paper. Definitely next time.”

Unfortunately for Heinz, there was not to be a next time. A note inside the envelope says that this was Heinz’s final letter home and that he was killed in action three days later, on August 27. The German War Graves Commission database says that Grenadier Heinrich “Heinz” Zboril from Vienna died in the hospital in Poltava, Ukraine on August 28. He was just 18 years old.