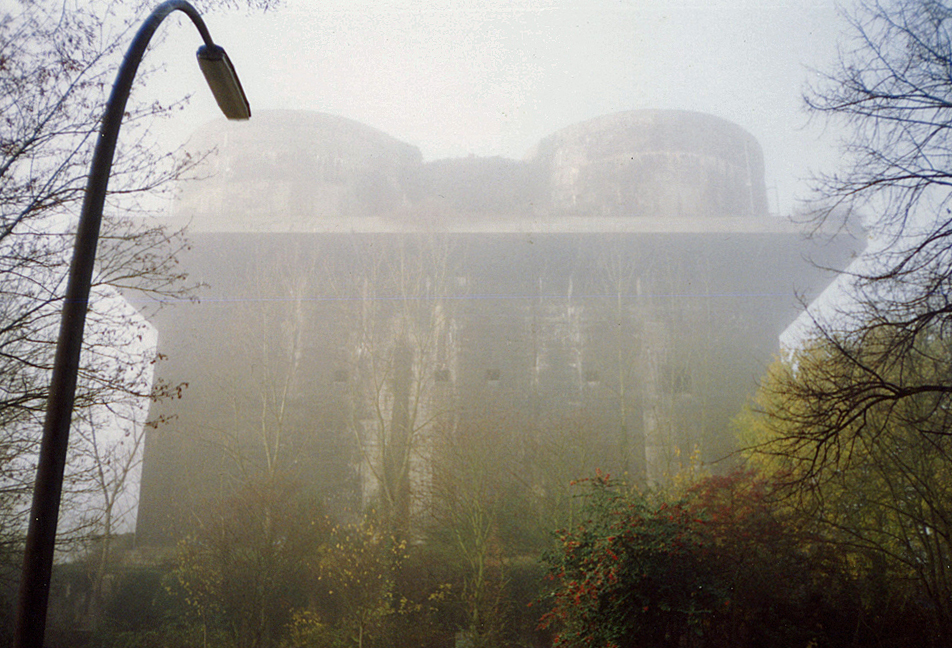 After the Allied bombing of Berlin in 1940, German military and civil authorities were hard at work trying to protect important cities and industrial areas as well as the people who lived and worked there. One innovation of this time was the Flakturm, a massive concrete complex that combined an anti-aircraft strongpoint with bombproof shelter for civilians. One such complex was built in Hamburg-Wilhelmsburg, of which one colossal tower still stands, an enormous edifice that carried the wartime designation Gefechtsturm VI.

Gefechtsturm VI was completed in October 1943. The walls were made of concrete at least 2 meters thick, the thickness of the concrete on the roof was 3.5 meters. On this roof were four gun positions with 12.8 cm Flak 40 Zwilling anti-aircraft guns and below this roof was a set of platforms for 2 cm and 3.7 cm Flak guns. Inside, 30,000 people could take shelter during air raids. The Flak guns were at least partially manned by Hitler Youth volunteers, schoolchildren. These guns were used not only to target aircraft attacking Hamburg, but also bombers headed for Berlin, as the Flakturm was situated under the approach route for that target. Every evening at 8 PM was a full alarm as bombers were targeted. One of the Hitler Youth “Flak helpers” later wrote, “There were infernal battle situations, but one had the feeling- especially here- of being able to defend oneself.” Can you imagine what it must have been like for the civilians in the shelter at night, with all the guns on the roof raging as bombs fell quite nearby?

In 1947 the Allies tried to demolish the tower by filling it with TNT. The explosion destroyed the interior but could not breach the massive exterior walls, the outside was unscathed. The structure was simply too massive to demolish.

I visited this place in 2001. The bunker is much bigger than I had imagined. I found it completely abandoned, neglected and overgrown. It was fenced off but the old fence was full of holes, it was easy to get through but the tower was surrounded by brush that made it hard to get around. The morning mist shrouded the tower and made it look like an ancient pyramid or castle, it was imposing and majestic. It was very hard to get any pictures of it, to get the whole thing in a picture you had to get really very far away from it.

The platforms and positions for the guns were apparently not damaged by the demolition attempt in 1947.

There was one steel door that was open and would have allowed entry to the destroyed interior. This intriguing door was in the sky, at the top of a dizzying stretch of sheer concrete.

Recently I was able to obtain this this Luftschutz Dienstbuch for a nurse.

This book was issued to Käte Grabau in 1941, she served as a nurse in the Sicherheits u. Hilfsdienst which was an organization tasked with helping out during and after air raids.

Grabau was born in Williamsburg in 1921. She worked in an office and lived just 4 kilometers from where the Gefechtsturm would be built. During the war she married Arnold Treder, a Wehrmacht soldier.

From August to November of 1944 she served as a nurse in this Flakturm, in the hospital that cared for the 30,000 people who could take shelter there. This book was there during the air raids. The nurse who carried this must have herself experienced this horror. If only the book could talk…

Serving as a nurse in the Flakturm may not have been the worst of this woman’s experiences. This entry indicates that she was continuously deployed during the terror attacks in Hamburg between July 24 and August 3, 1943. This was “Operation Gomorrah,” the destruction of Hamburg. More than 40,000 people died during these raids, most of them on the night of 27/28 July during a horrible firestorm that did more damage than the atomic bomb dropped on Nagasaki. Most of those killed were women and children and the elderly, they suffocated or roasted alive in their cellars. The firestorm created a harsh alien world in which life was not possible, the air turned to fire and the intense heat shrunk corpses to a length of 20 inches, a family could be brought out of a cellar in a washtub. The dead were buried in mass graves. This book was there then, too.

In recent years the Flakturm in Wilhelmsburg has been completely cleaned and renovated, openings cut into the walls, the destroyed interior removed and the surrounding area cleared. A cafe near the roof with lots of new glass gives access to a platform for viewing. It is now used as an “Energiebunker,” filled with green power sources and covered with solar panels. Too big to tear down, it is being put to a new use that makes sense in a modern city.