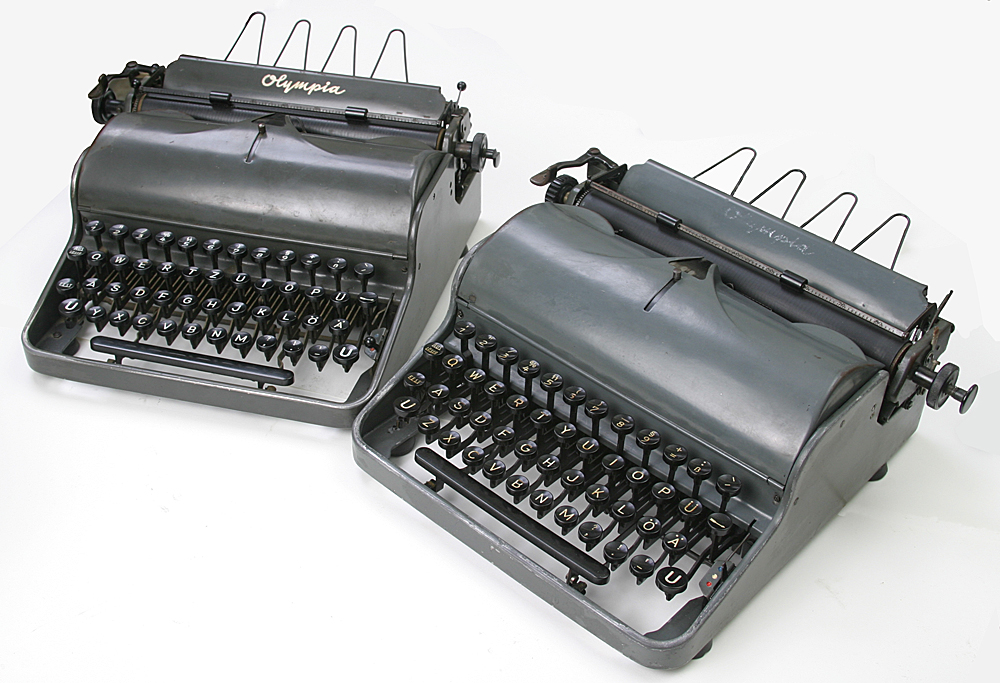 1935 Triumph Norm portable typewriter, S/N 162810.
This is a very fast and snappy machine, that is very well made. It is great for typing on. I had the platen recovered with new rubber and it types the way it did when it was new.

1938 Continental Silenta standard typewriter, S/N 705956
I found this machine in a junkyard in Germany where it had been brought in as scrap. These were top of the line machines, very expensive when new. The type bars have a special action that softens the sound of the typing.

1938 Rheinmetall klein portable typewriter, S/N 226729
This typewriter appears to have been barely used. It was well-protected by the case, over the years, and is in excellent condition. A receipt inside is from when this was serviced in the 1970s. Many prewar typewriters remained in use long after the war, as typewriters were expensive to buy and built to last, and the basic mechanical function remained practically unchanged for a long time. This typewriter is so pristine, I have never used it.

1940 Olympia Robust portable typewriter, S/N 311483
This military issue field typewriter was found on a farm near Skrunda in Latvia, which was inside the Kurland pocket at the end of WWII. It had almost certainly been left behind there when the Germans finally surrendered in May 1945. This typewriter shows postwar alteration and use. The typebar cover has been replaced with a home-made piece of sheet metal, and the carriage release lever has been replaced with a keytop from a Cyrillic typewriter. The field-gray paint is extremely worn, and the frame is cracked. Life in the early postwar period in central and eastern Europe was often difficult and plagued with shortages of basic goods. People often had to make do with military surplus items.

1942 Olympia Robust portable typewriter with transit crate, S/N 400047
This military issue typewriter is complete with its original transit crate. The inside lid of the crate retains a label showing the features and functions of this machine. This was brought back to the US as a GI souvenir after WWII. The keyboard was converted from the German “QWERTZ” to the English “QWERTY” keyboard layout.

1943 Olivetti M40 Kr standard typewriter, S/N K378964
This was the wartime economy version of the Olivetti M40, designated “Kr” for “Krieg” (war). The decal on the rear translates to, “Simplified war version.”

1943 Olympia Robust portable typewriter, S/N 458454
This is a well-preserved example of the standard Wehrmacht issue typewriter. It was found in a house near Markersdorf, Austria, one of the last German air bases operational in the spring of 1945. The house where this was found was about 5 miles from the secret “Projekt Quarz” underground slave labor factory outside of Roggendorf.