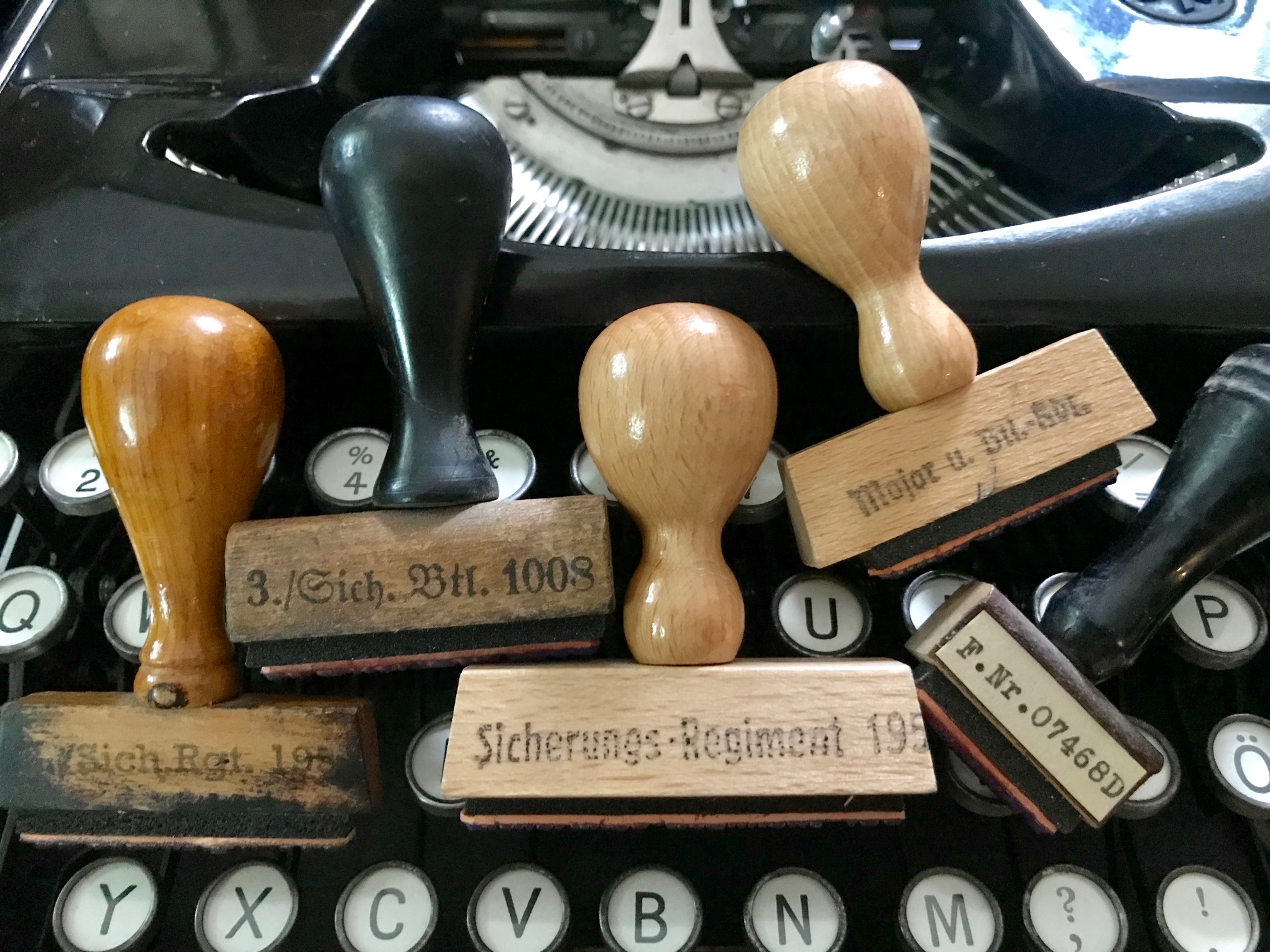 What stamps do I need to be able to fill out Soldbücher for people in my reenactment group?

“What stamps do I need to be able to fill out Soldbücher for people in my reenactment group?” I have been asked this question many times and I always enjoy answering it, because I think it is great when someone decides to offer this service to the people in their group. In my opinion, having the correct personal identification paperwork for a living history impression is every bit as important as having the right hat or belt buckle. A dedicated clerk in a reenactment group can research and learn all of the unit-specific details that are applicable to their group’s paperwork, and can in most cases create more realistic paperwork, for that specific unit impression, than anyone outside the group could, without the benefit of that research. But in any case, to create a realistic-looking Soldbuch, you are going to need stamps- and in most cases, quite a few of them. To answer the question of what stamps are needed, I will first provide some information about what entries are typically found in the Soldbuch. I’m going to use the page numbers for a Heer Soldbuch, here. The entries would be the same in the Soldbücher of other branches, but the page numbers may be different.

The Soldbuch was introduced in 1939. Soldiers who were already in the Wehrmacht in the fall of 1939 were issued books by whatever unit they were serving in at that time. For people who joined the Wehrmacht after that date, their Soldbuch was generally issued by the training or replacement unit in which they got their basic training. Most soldiers kept the same Soldbuch for their entire military career, though it was not uncommon for a replacement to be issued later, usually (not always) because the original was lost or damaged. The first entries made in the Soldbuch were on the first 5 pages. These pages recorded a soldier’s personal details, and the unit to which he was assigned. To make these entries, you need to have, at the very least, a round unit stamp for page 2, with the designation of the unit that issued the book. You may want this to be a stamp for a training or replacement unit that supplied recruits to the unit that your group portrays. Or, you could use a stamp with the designation of the field unit your group portrays, for issuing “replacement” books, or books that would have been issued in 1939. Or, you could use a stamp for almost any unit, and then “transfer” to the unit your group portrays. The unit entry on this page 2, next to the round stamp, was often a line stamp, and the rank and role of the officer who signed the book was often indicated by a stamp here as well. The units a soldier served in, both training/replacement and field units, were all recorded on page 4; you may want line unit stamps for this page. Also at the start of a soldier’s career, his pay grade was entered on page 18, usually with the stamp of a paymaster. And soon after a soldier joined the Wehrmacht, he would be issued uniforms and equipment; these were entered on pages 6 through 8d, sometimes with associated stamps. Page 9 was for immunizations, which usually began in training and continued throughout a soldier’s service time, and there were stamps for these, too.

During a soldier’s wartime career, he might be transferred to a different unit, go to a hospital due to illness or wounds, be awarded decorations, go on leave, be promoted, be issued various kinds of pay or soap or other kinds of gear, or undergo security checks. There were stamps for all of these things. A soldier who served for years would likely have many entries made in his Soldbuch by different people, at different times. And these entries might have stamps specific to the type of entry, or they might be stamped with a unit stamp, or approved by an officer who might then stamp his own rank and role beneath his signature. Any given entry could be made without a stamp, but the stamps were widely used, and any book with a lot of entries will have a lot of stamps. To make all these various entries, I offer two different sheets of stamps for the Soldbuch. Both of the sheets contain many “generic” type stamps such as medical stamps, rank stamps for officers, stamps related to issue of equipment, etc., that could be used in almost any Soldbuch. If you are new to filling out the Soldbuch, sheet A will get you started. As you get proficient in using these stamps, you will likely want sheet B as well. With the stamps on these two sheets, you have the ability to create very realistic-looking documents, with the typical well-traveled appearance of books carried by soldiers with extensive wartime experience.

But what about stamps specific to your unit? If you plan to fill out multiple Soldbücher for the same unit, I think you would find the following stamps useful:

-A round stamp and line stamp with the designation of the unit your group portrays. These can be used for leave award entries, security checks, etc. as well as on award documents.

-A round stamp with the Feldpost number of the unit your group portrays. These were used on mail and were widely used to certify entries in the Soldbuch and other documents for units in the field.

-A round stamp and line stamp of a training/replacement unit that supplied recruits to the field unit your group portrays, for use on page 2 and on entries pertaining to training.

Many units (both training units, and field units) changed their designations over the course of the war. If this is the case with the unit your reenactment portrays, you may want to get stamps for each of the different designations, for recreating Soldbuch entries made at different times.

I can make any custom stamp, and if you don’t know your unit’s Feldpost number or the n of a training/replacement unit that would fit for your group, I might be able to help; just e-mail me at intrenches1945@gmail.com.