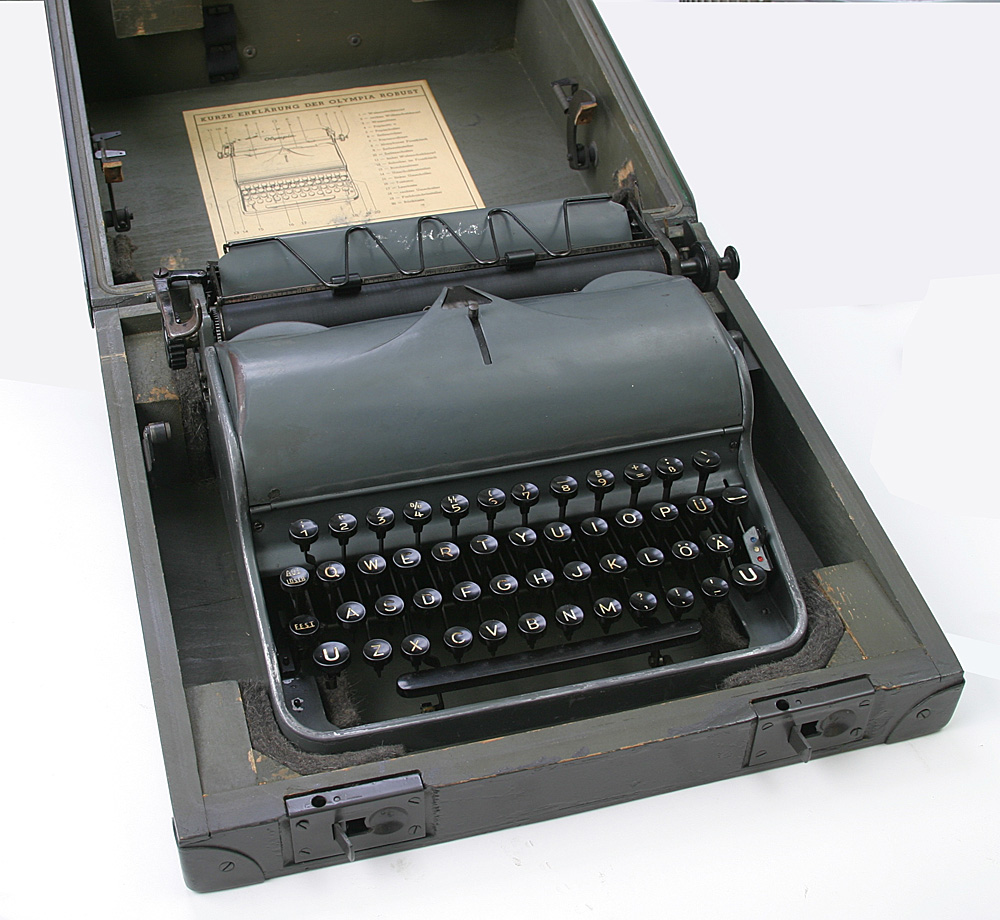 During WWII, many German typewriters (and some typewriters made in other countries) were manufactured with a special key that types the runic emblem of the SS, a paramilitary organization that was a branch of the Nazi party.

These typewriters were manufactured by companies including Groma, Olympia, Torpedo, Triumph, Continental, Urania, and Seidel & Naumann, among others. Some typewriters made by Remington in the USA, and by Olivetti in Italy, with German keyboards and intended for the German market, were also fitted with SS runic keys.

The German factories that made typewriters, generally speaking, made thousands of typewriters each year. These typewriters were available with a nearly infinite number of keyboard and type slug configurations. The SS rune was only one of a large number of special characters that were manufactured. Some Third Reich-era typewriters came from the factory with the SS runic key, but with others, this key may likely have been an option that could have been chosen when ordering. Any competent typewriter repairman in those years could easily have switched out type slugs and keytops. It is not at all uncommon to find special keys on typewriters where the keytop or typeslug do not exactly match the others in terms of paper shade or character size. They could have left the factory like that, or been modified by a distributor, retail shop or a typewriter repairman.

Who used typewriters with the SS key during WWII? Typewriters with field-gray paint were likely intended for military use. The Olympia “Robust” model, which was made both with and without the SS key, came in a special wooden transit crate and was designed to be especially resistant to dust; these were undoubtedly intended for use by troops in the field.

Most typewriters with the SS key are identical to other commercially available typewriters that were marketed to civilians. It’s possible that typewriters such as these were used by military and government offices. It’s also possible that these could simply have available for anyone to buy. Documentation about specifically who used these typewriters, or if their use was restricted in any way (other than wartime restrictions that applied to any kind of typewriter), has proven elusive. It is not true that all German typewriters in WWII had this key. One SS-keyed typewriter in my collection came from a man who said his father used it during his wartime service in a German Army munitions depot. Other typewriters that I have with this key, bear commercial type labels for typewriter dealers or distributors, something I would not expect for machines made exclusively for government or military contracts.

After the war, many typewriters with the SS key were modified. Some were “denazified” by grinding off the runic sybol on the type slug and removing it from the keytop. Others had the SS slugs and keytops completely removed and replaced with other characters that were more useful after 1945. Many unmodified examples have nevertheless survived, and WWII German typewriters with the SS key are not very rare to find today, though they often change hands for significant sums, as they are desirable collectibles.

If you have questions about a specific WWII typewriter with the SS key, please email me at intrenches1945@gmail.com.