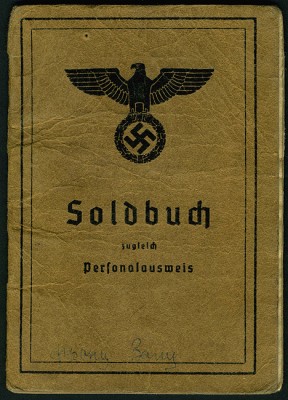 I wanted to show this Soldbuch from my collection because of a few interesting details. The first thing you might notice is the variant cover which is made out of a smooth card stock and has different graphics from the more common bark-textured stock. Another feature I want to point out is the lack of a photo. Prior to November 16, 1943 there were no photos used in Heer or Luftwaffe Soldbuecher (the Kriegsmarine had been using photos since 1941). The original regulation from when photos were introduced dictated that photos must be in the books by April 1, 1944 for Ersatzheer units and Dec. 31, 1944 for field units. However, for one reason or another, many soldiers never got the pictures entered into their documents before the war ended. Sanz was born in 1912 and the Soldbuch was issued to him in 1939. He served through the whole war with Gebirgs-Artillerie-Regiment 94 and was awarded the Ostmedaille, Iron Cross 2nd Class, Black Wound Badge and the Romanian Commemorative Medal for the Crusade Against Communism. Gebirgs-Artillerie-Regiment 94 was part of the 4. Gebirgs-Division which spent the war fighting on the Eastern Front. He survived the whole war and surrendered to the victorious Russians at the end but sadly Sanz (like so many others) did not survive the brutal and inhumane conditions typical in Russian prisoner of war camps. He died on October 9, 1945 in a camp in Kherson, Ukraine and is buried as an unknown soldier along with more than 20,000 other German soldiers in the war cemetery at Sevastopol.